The mining area of Nord-Pas-de-Calaisnote is a territory of the French region of Nord-Pas-de-Calais marked economically, socially, paysagèrement, ecologically and culturally by intensive coal mining, dated Stéphanien presents in the basement of the late seventeenth century to the late twentieth century. This is the western portion of a deposit that extends beyond the Franco-Belgian border.

The mining area covers 200 km2 in 1 the Nord and the Pas-de-Calais, 9.5% of the area of the French region of Nord-Pas-de-Calais. It hosts the late 1980s a two hundred inhabitants one million miles, or 31% of the regional population. Hundred thousand kilometers of galleries and eight-one hundred to eighty-five well about was undertaken in three hundred years of history.

The nearest coal deposits are the coal basin of Boulogne to the west (sometimes combined), the Belgian coalfield northwest (continuity), the Saar and Lorraine coal basin in the southwest and the coalfields Littry and Le Plessis-Lastelle southwest. 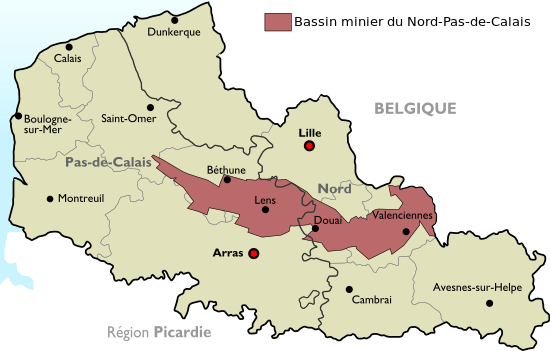 The first coal outcrops were discovered in Boulogne 1660, the first dated grave is that of Cavrel of Tagny, begun in 1692 and abandoned the following year. Therefore, a multitude of small relatively ephemeral pools are open on the basin of Boulogne, extended a few square kilometers, they counted on the fingers of the hand in the twentieth century. Coal has been first exploited in the current department of Pas-de-Calais. It's in the late 1710s as coal research began in the current Dunord department: in 1716, Nicolas Desaubois partners with Jean-Jacques Desandrouin and his brother Jean-Pierre Desandrouin, Jacques Richard and Peter Taffin. They open without some success quickly flooded pits before a coal seam about four feet in thickness is reached at the Jeanne Collard pit February 3, 1720, the pit itself is flooded at the end of the year and could not be repaired, but it is now accepted that there is coal in Fresnes-sur-Escaut. Well openings succeed, but success is not this that from June 24, 1734, when bituminous coal was discovered in the pit Pavé Anzin. Trial then taking place as to the distribution of wealth, but Emmanuel de Croy-Solre manages to associate different people November 19, 1757, the Company pourfonder mines of Anzin. This company quickly takes great extent. In parallel, research companies are born throughout the eighteenth century, but the most notable works are carried out by the Company mines Aniche who discovers coal in this town on the night of 11 to 12 September 1778, the pit St. Catherine - Saint-Mathias.

The early nineteenth century is especially marked by technological advances, including the steam engine, which facilitates extraction. Progress is also being made in water depletion. The Anzin Mining Company discovered in the late 1820s a deposit at Denain. The 1830s and early 1840s were marked by the industrial revolution, new industries have a huge need for coal, which created the North decherté a period of coals, and the creation of a large number of research firms who conduct polls, even well outside existing concessions, following the success of

Douchy mining Company in Lourches, which after opening the Saint-Mathieu pit and other pits, s' is found in a few years already qualified. Among all these small companies, almost all of them disappeared, others have developed, like thecompany Vicoigne of mines, the Thivencelle Mining Company and the Mining Company Agincourt. Shareholders have seized control of the mines Aniche Company in January 1839, they undertook several surveys, including one in Somain reveals the presence of coal. They then begin immediately pit the Renaissance who successfully extracted in 1841. This pit allows the company to open other graves and grow considerably to become one of the major French companies.

This research has also been conducted to the Pas-de-Calais. In 1841, Henriette de Clercq drill an artesian well in the park of his castle in Oignies, it is pushed deeper than expected, and thus demonstrates the presence of coal, however, the results remain confidential for several years. She then teamed up with Louis-Georges Mulot, and founded a company into the Mining Company Dourges. On the other hand, Eugene Be conducting a survey in the hamlet of Escarpelle in Roost-Warendin, June 13, 1846, and discovered coal. A first trench is then begun in 1847 near the Scarpe and commissioned three years later. Very quickly, other companies start doing surveys, and some are also beginning to sink wells. Thus in the early 1850s are born mining companies to Courrières, Lens, Bethune Nœux Bruay Marles, Ferfay, Auchy-au-Bois etFléchinelle. These companies are awarded concessions laid in parallel strips on a north-south axis. From the second half of 1850, companies are resettled to the north and south of these concessions, not without trial. These mining companies Ostricourt, Carvin, Meurchin, Douvrin, Lievin, Vendin, Cauchy-à-la-Tour ...

Therefore, the mining area grows exponentially. pits openings succeed, slag heaps are height. It was also at this time that the mining towns and settlements appear to accommodate a growing number of workers. This growth takes place throughout the second half of the nineteenth century and in the 1900s Some companies, Drocourt, Marly ... Flines appear during this period. However, ownership of Lille families, the deposits of the mining area offer such performance in Exchange Lille that seeking gains quickly outweighs the investment effort. The Anzin Company, 1st company in Europe (4000 employees) 1780s fades away very late before those of Lens, Courrières, Vicoigne and Bethune. The year 1906 is marked by the courrières mine disaster that took place on March 10 and killed 1,099 people. Long strikes followed, and mine safety was improved.

The mining area is hit hard by the First World War: everything is in the vicinity of Lenset east is literally wiped off the map. Many battles took place in the mining area, because coal is a crucial resource. The reconstruction lasted until the mid 1920. The pits and cities are rebuilt according to its own architecture to each company. This period was marked by the arrival of Poles and Italians, although other nationalities are also present. The early 1930s was marked by the effects of the Crash of 1929, some economic downturn, and the arrival of the Popular Front to power in 1936. The mondialecommence War in 1939 and the mining area is found quickly occupied. The miners then resist the occupier, whether by a production slowdown or by regular sabotage. Some even paid with their lives. More than two thirds of minors basin went on strike in June 1941.

After the withdrawal of the occupier, companies are nationalized. A process begun in 1944 which ended May 17, 1946 with the creation deCharbonnages France. The collieries of Northern Basin Pas-de-Calais are initially divided into eight groups, some then fuse. A vast housing construction and modernization of facilities is then undertaken in the late 1940s to the late 1950s Extraction is then combined on concentration seats, around which are retained service pits and ventilation. The battle Coal aims to raise France. The recession began in the early 1960s with the adoption of the Jeanneney plan.

The least profitable pits are gradually closed, or stopped in the extraction and concentrated on other seats. Numerous strikes broke out in the mining area, including minors soon they will be unemployed. Gradually, industries and pits close to one after the other. In 1980, there are no more than eight seats concentration (along with a host of service pits and / or ventilation): 19 Lens on 3 Courrieres, 10 Oignies 9 of 'Escarpelle, Barrois, Arenberg, Sabatier and Ledoux. The Lewarde Mining History Center is open to the public in 1984. In 1990, it remains only 9 of Escarpelle and 10 of Oignies. These two seats close to the end of the year. Last Gaillette is raised in this second seat to the service pit No. 9-9 bis 21 December 1990. With few exceptions, the surface facilities are being systematically destroyed, and many cities. Many dumps has been operated since 1969.

If the 1990s were marked by a desire to erase all traces of the past, the 2000s are for their marked by an awareness of the interest of the natural and built heritage. Since 2003 Mining Basin Kingdom, Mission Coalfield and The Slag Heap Chain prepare a folder to classify the mining area of ​​Nord-Pas-de-Calais World Heritage of Unesco. This case will be examined from June 24 to July 6, 2012 in St. Petersburg (Russia). In this sense, many remains were classified or registered historical monuments in 2009 and 2010. On Saturday 30 June 2012, 353 members spread over 109 sites are classified as World Heritage by UNESCO.